The Black Stars of Ghana will play Switzerland in a pre-World Cup friendly for the first time before the Qatar 2022 World Cup.

According to the Ghana FA the game will be played on Thursday, November 17, 2022 at the Baniyas Club Stadium in Abu Dhabi, United Arab Emirates.

The Black Stars of Ghana will for the first time in history play against Switzerland in an International friendly before their opening match at the FIFA World Cup Qatar 2022 tournament. 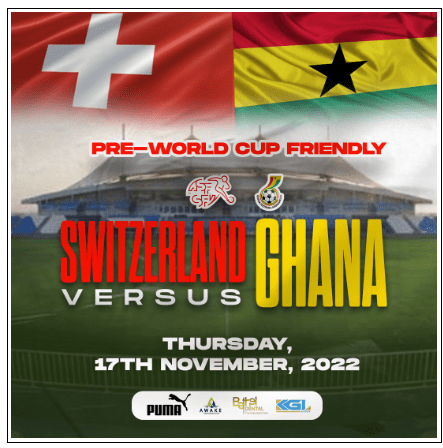 The game will boost the Black Stars for their Group H opener against Portugal at the 974 Sports Stadium.

The Black Stars will later take on South Korea (November 28) and Uruguay (December 2) while Switzerland face Cameroon (24 November), Brazil (28 November), and Serbia (December 2) on the same days as the “Black Stars” in Group G.

The international friendly match against the Swiss national team will complete the calendar of the Black Stars – going into the FIFA World Cup Qatar 2022 tournament.