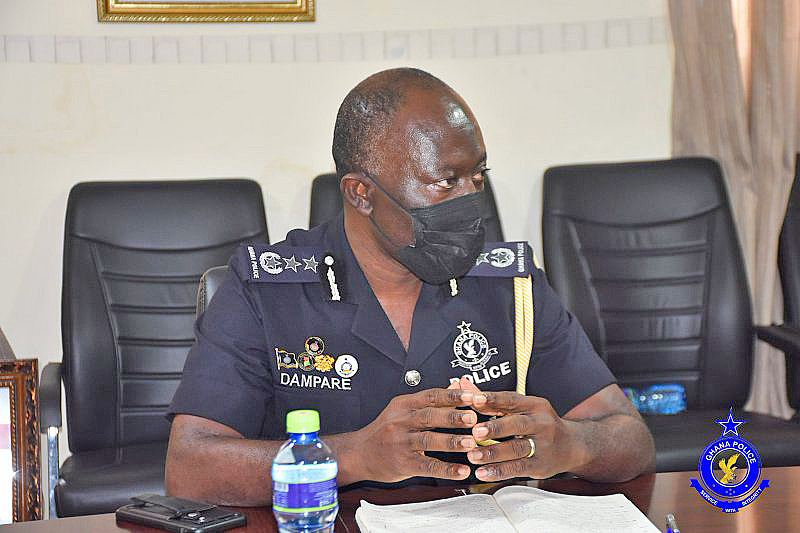 The acting Inspector General of Police, (IGP) Dr George Akuffo Dampare, has directed the Criminal Investigations Department (CID), headquarters to provide technical support to the Bono Regional CID to effectively investigate the murder of three persons at Abesim in the Sunyani Municipality.

“The murder case involves one Richard Appiah, a 28-year-old architect, suspected to have murdered 12 and 15 years old young men and a yet-to-be identified man whose bodies were found in his living quarters at Alaska, near Abesim, on Friday, August 20, 2021,” a press release issued by the Police said.
A copy of the release signed by Assistant Commissioner of Police Kwesi Ofori, acting Director-General of Public Affairs, said the arrest of Appiah, now in custody and assisting with investigations, was facilitated by the collaboration of members of the community.
Dr Dampare in commending the Police and the community for the timely arrest of Appiah, urged the deepening of civil-police collaboration to promote peace and security in the society.
Tragedy hit Abesim, a farming community in the Sunyani Municipality in the early hours of Saturday, when Appiah, a popular footballer, allegedly murdered his 12-year-old relative, with two others, and kept the body in a room.
Media report indicates that, the town had been thrown into shock and disbelief as residents were sighted in groups discussing the murder of Louis Agyemang Junior.
Police have since retrieved and deposited the body at a private mortuary at Mantukwa in the Sunyani West Municipality.
During a search, the Police discovered some human parts, including two human heads, in a refrigerator in the suspect’s room.
In an interview with the media, Mr Thomas Agyei, the father of Louis, explained that his twin son left home on Friday but as at 1900 hours he had not returned.
He said a family member informed him that he saw Louis in the company of Appiah, adding that the family, therefore, became suspicious.
They, consequently, mobilised some young men and went to the house of Appiah’s father at Alaska, a new settlement at Abesim.
Mr Agyei said they met him in the house, where he told them that Louis had left for home.
Consequently, the group mounted a search for the suspect all night but to no avail.
He explained that Louis’ mother, who was unsettled in her spirit, asked the search party to return and search Appiah’s house.
This infuriated Appiah, who resisted the intervention and picked up a quarrel with her.
“The search party also became infuriated, went back to the suspect’s house and discovered one of the rooms in the house was locked,” he said.
“We asked the suspect to open the room but he refused to do so under the pretext that the key to that particular room was lost, so we forcibly broke into the room and I saw the body of my son lying prostrate in a pool of blood,” Mr Agyei amid sobs.
Relatives and members of the community have since been condoling with the bereaved family, as they try to come to terms with the tragedy.
The elder twin of Louis, told the media that his brother was very calm and respectful, but adventurous.

Over GHC720,000 lost to African Swine Fever at Saki