The Minister of Education, Dr Yaw Osei Adutwum; the Asantehene, Otumfuo Osei Tutu II; the Paramount Chief of Tepa, Nana Adusei Atwenewa Ampem I; and seventeen others have been honoured for their contribution and support towards education and the socio-economic development of Tepa and its surrounding communities in the Ashanti region.

Speaking at the event, Dr Yaw Osei Adutwum expressed his gratitude for the honour done him and commended the Asantehene and Tepahene for their roles in the development of education. 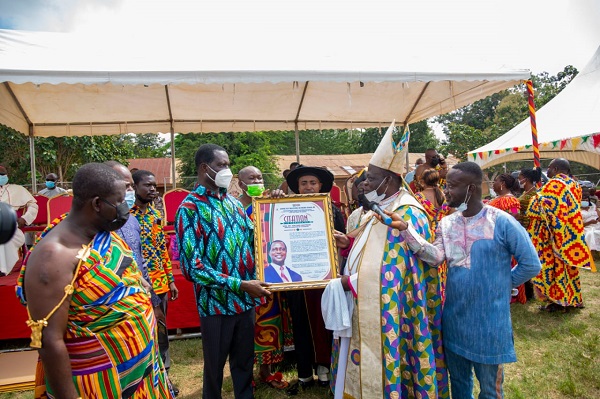 He also called on other chiefs to emulate the initiative to complement government’s effort in transforming education in the country.

The Minister emphasised the need for a collective effort by all stakeholders to sustain government’s free SHS policy.

He said, “although the government is doing everything possible to provide the needed resources towards the development of education if all stakeholders do not play their collective roles, it would be very difficult to get the right results.”

The annual event organised by the Divine Key Believers Network-Ghana in collaboration with Prince Hampel World Outreach (UK), and the Tepa Local Council of Churches awards individuals who have distinguished themselves for the socio-economic development of the area and the country at large.

The award ceremony which was in two categories saw the President of Prince Hampel World Outreach (UK), Prof. Prince Hampel present citations to the Minister and the Tepamanhene, whiles that of the Asantehene was received on his behalf by the Paramount Chief of Kuntanase, Barima Ogyeabour Amankwa Adunan I.

The other awardees including five politicians and 12 clergies received plaques.

Ambulance Used For Carting Cement Not in Our Custody -NAS