“The process to establish the root cause of the contamination has been unfortunately hampered by the unapproved and unilateral decision of the Management of Marwako to destroy some of the food items whilst the investigation was in progress.

The Food and Drugs Authority (FDA) has disclosed the outcome of its investigation into the recent incidence of food poisoning at the East Legon branch of Marwako Foods.

According to the FDA, it discovered poor sanitation, poor storage and microbial infestation as the causes of the incident.

In a statement issued on Monday, June 13, the FDA explained that based on its findings, the eatery failed to observe the appropriate sanitary practices, leading to widespread food poisoning, which was reported by affected customers.

“Analyses of samples of food, some juice drinks, and swaps taken from the environment at the East Legon branch of Mawarko Fast Food Limited indicate that there was heavy microbial load (pathogens) which may be linked to the food borne disease reported.

“Samples collected from the Abelenkpe and La branches were also found to be contaminated. The levels of sanitation and hygiene in the food preparation areas in all three facilities were poor”, portions of the statement read.

The FDA’s release continued: “It was also established that there were poor storage practices. The temperatures of deep freezers and refrigerators were far above the acceptable ranges. The handling practices of ingredients used in cooking, cooked and ready-to-eat food items were also very poor”.

The FDA lamented the lack of cooperation on the part of the Management of the restaurant in its findings.

In this regard, the FDA said: “The process to establish the root cause of the contamination has been unfortunately hampered by the unapproved and unilateral decision of the Management of Marwako to destroy some of the food items whilst the investigation was in progress. 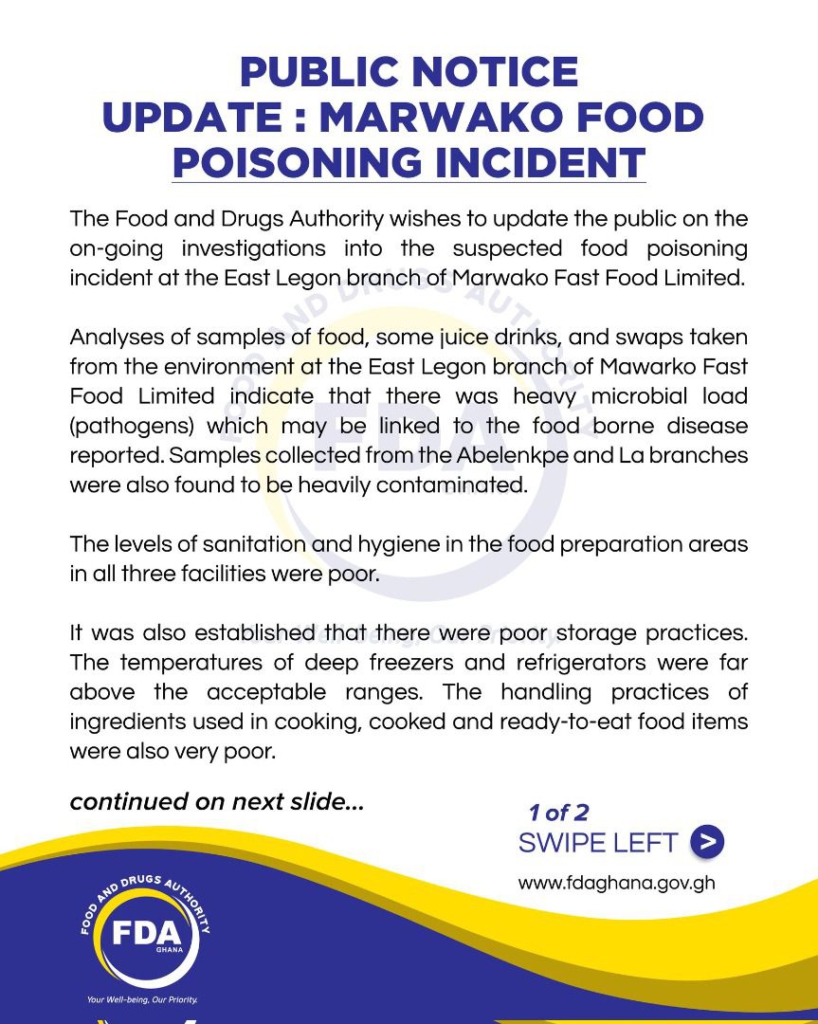 The FDA has applied the appropriate regulatory sanctions and is also monitoring the implementation of the corrective and preventive actions (CAPA) by the Management of Marwako Fast Foods to address all the non-conformances identified to prevent any reoccurrence”.

In conclusion, the regulatory body said: “We wish to assure the public that we will continue to closely monitor all activities at Marwako Fast Foods Limited to ensure compliance to the FDA’s directives and applicable regulatory requirements. Catering services at the facilities remain suspended. The public would be updated on any subsequent developments”.

On May 12, 2022, the Food and Drugs Authority (FDA) closed down the East Legon branch of Marwako restaurant, following widespread reports of food poisoning on social media.

In a tweet, the FDA stated that the move to close down the restaurant is to enable the Authority to conduct investigations into customers’ complaints.

“The FDA has taken notice of complaints from the public about the suspected food poisoning at the East Legon Branch of Marwarko Restaurant.

“We have closed down the restaurant and together with other relevant agencies, started investigations”, the tweet said.

Marwako, a fast-food eatery in Accra had been trending on Twitter after several Twitter users complained of food poisoning after eating there.

The Twitter tirade started after a user, Edward Elohim, shared that the fast-food service had served him and several others with food that is contaminated.

Several other users rehashed his statement, accusing the fast joint of putting them in a similar situation since the weekend.

Many were subsequently hospitalised with many of the alleged victims referencing the eatery’s East Legon branch as the possible source of their discomfort.

Some users, therefore, urged the Food and Drugs Authority to take action against the company.

Amidst the complaints, some affected customers hinted at filing a class action suit against the fast-food service.

Dr. Adutwum appointed to Advisory Board of University of California, USA