Police say they have secured a court order to refer the husband of missing Rhodaline Amoah-Darko for a psychiatric examination.

In a press release on Wednesday, October 27, the police said they made the move on Tuesday as a result of “some incoherent statements from him on the matter”.

Madam Rhodaline Amoah-Darko left her Gyenyase home on Monday, August 30 to Sunyani but has since not returned nor been seen.

With the Lands Commission, missing Rhodaline is said not to have gone on the trip on official duty, according to preliminary investigations of the police.

“No other staff of the Commission or any other person linked to Mrs Rhodaline Amoah-Darko has been declared missing or found dead,” the police said on Monday, September 6, 2021.

In their latest statement, the police said investigations are still ongoing and “at this point, we are unable to disclose any information to the public on the matter”.

The husband, Dr Wilberforce Aggrey, has also no links to the disappearance of his wife, the police stressed.

“It must be placed on record that as of today, Wednesday, October 27, 2021, the police have no evidence linking Dr Aggrey to the disappearance of Rhodaline.”

They called on persons creating and circulating unconfirmed reports on the matter to desist from such practice “since their actions can impede police investigations”. 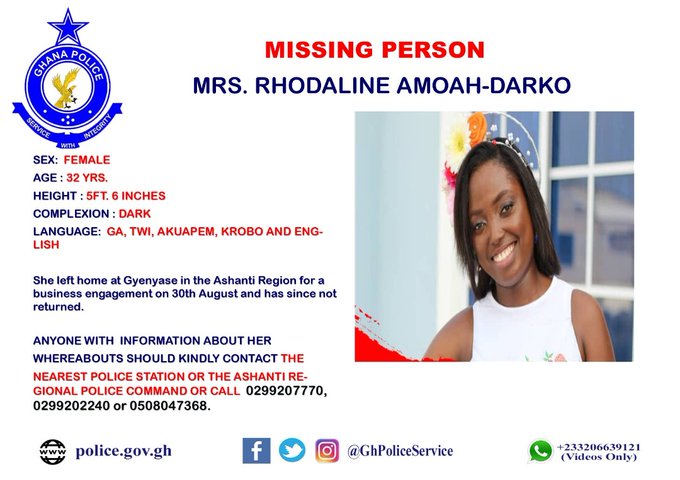