Africa is known as a tribal continent even though it is not always the determining factor in a nation’s life. Colonial powers took little notice of tribes when they drew their national boundary lines.

The result is that several tribes overlap into two or even three modern-day countries. In countries like Egypt, the population is described as Egyptian or Arab without reference to origins. The subject of tribes and ethnicity in Africa is one of fascination. Over the years, adventure films have often portrayed tribes as living as their ancestors did generations before. It makes for a good story and in many instances, it does still apply today. In others, it most certainly does not as the culture has changed or evolved.

With around 3,000 tribes and 2,000 languages and dialects, Africa is a continent with fascination around every corner.

Other continents of the world lack Africa’s natural diversity. Some are well-developed, largely industrialized and the tribe has never been a factor. ‘’Community’’, yes but social status rather than origin has been the important factor.

Difference between Ethnicity and Tribe

It is important to understand the difference between ethnicity and tribe. A Tribe is an organization of people who share the same culture and language. History can point to the success of a tribal organization as a means of living, if not particularly a means of creating wealth and well-being.  In the days when African life was largely rural, few members moved away from their tribal areas.

The growth of conurbations began to change that to a limited extent as people sought work rather than living a subsistence lifestyle. Ethnicity is a broader term. An ethnic group can include several tribes; the Ashanti, Akyems and Bonos are all tribes within Ghana in West Africa yet in ethnic terms, they are all Akans.

It was the colonial powers who introduced the idea of nationalism into Africa, but it is not something that everyone has embraced; tribal differences have created conflict even within recent decades although the conflict has been between tribes with the same nationality.

The Biafran War in Nigeria half a century ago devastated large parts of Eastern Nigeria as the Igbo unsuccessfully sought independence. Rwanda is a more recent case in point with the Tutsi subject to genocide by the majority Hutu in the last decade of the 20th Century. Contrast Rwanda with Ghana where tribal and ethnic pride exist but so does national pride. This Western African State adheres to democracy despite its tribal diversity.

Africa is a vast continent which can be broadly divided into regions although climate and vegetation are both factors in deciding which countries and hence their people belong in which region. Here are some tribes to give you a general idea of their history, and lifestyle. 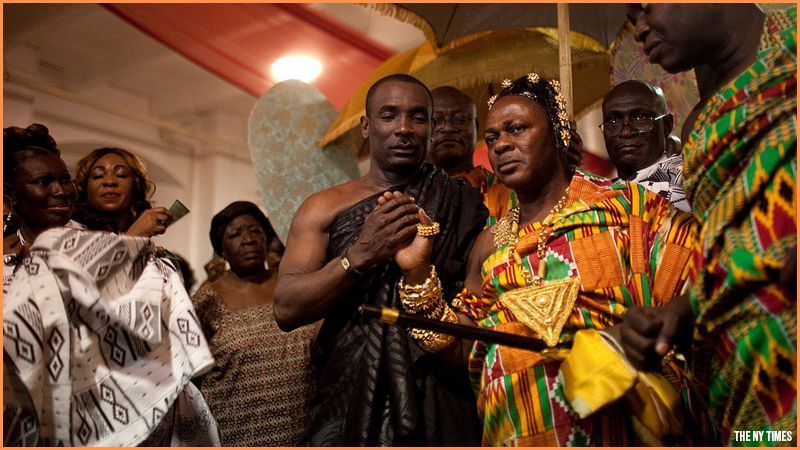 Numbering around 9 million, the Ashanti of Ghana have their own language although the colonial language, English, is understood in cities. Their religion involves the supernatural and spiritual with ancestors very important in family life. Those aspects are more evident in rural areas away from Ghana’s capital, Accra.

While some would say that North Africa is merely made up of the countries bordering the Mediterranean, there is a strong case for including the relatively dry countries on the southern border of the Sahara as belonging to the North.

Not surprisingly for such a huge region, there is significant diversity of peoples and although there are cities on the Mediterranean, life has been largely nomadic for many of the tribes within the Sahara and the Sahel.

A brief look at just three tribes described for the purposes of this article will illustrate differences and similarities that exist:

The Tuareg are a large tribe of Berber ethnicity occupying huge areas of the Sahara Desert. As nomadic pastoralists, they travel to seek food and water. As a result, they are found in the Mediterranean countries such as Libya and Algeria as well as countries in the region known as the Sahel, on the Sahara’s southern boundary, such as Niger. 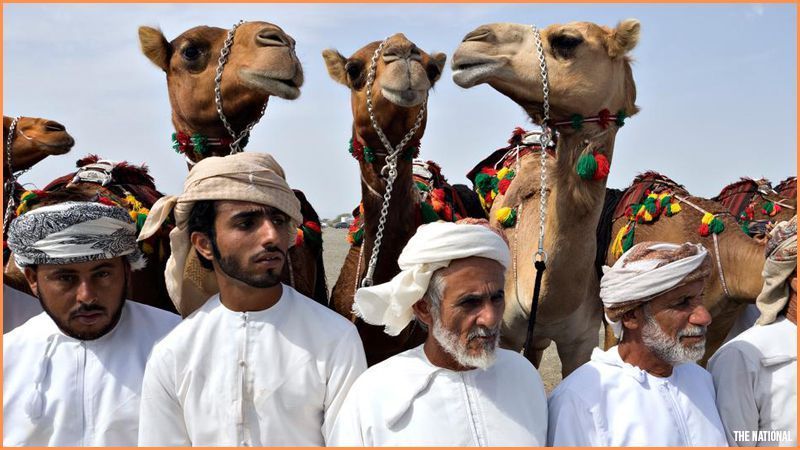 The Bedouin are also nomads of Arabic origin who live in the North East of Africa but have also spread across Iraq and the Arabian Peninsula. The name comes from the Arabic word ‘’ badawi’’ meaning desert dweller. Largely Muslim naturally, they tend goats and camels. 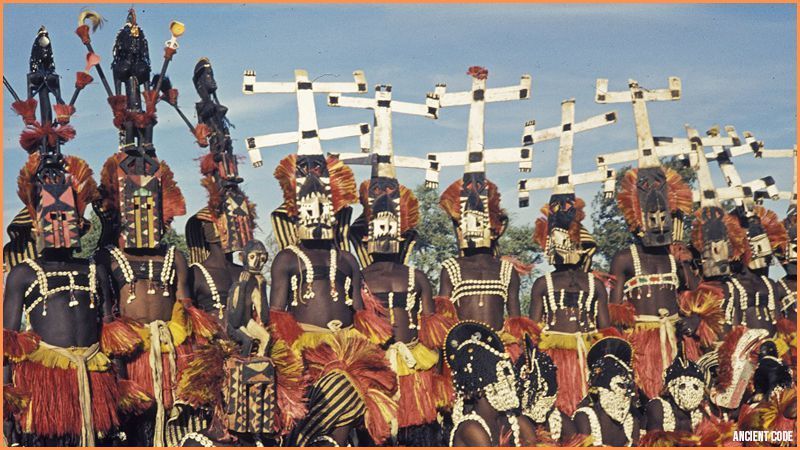 The Dogon are a branch of the Niger-Congo language group, a tribe of anything between 400,000 and 800,000. They live in villages in good defensive locations on the Central Plateau of Mali and into Burkina Faso. It is thought that they originally headed from the north to avoid Islamisation and their lives revolve around their traditional religion though some are now Muslims and others, Christians. Famous for their art and their astronomical knowledge. The Dogon survive by growing crops and keeping livestock.

Accepting that definition of the North, it means that West Africa comprises the Atlantic Coastal Countries heading south from Mauritania and turning west through Nigeria and the Cameroons into the Equatorial Forest region. There are several tribes throughout the West including: 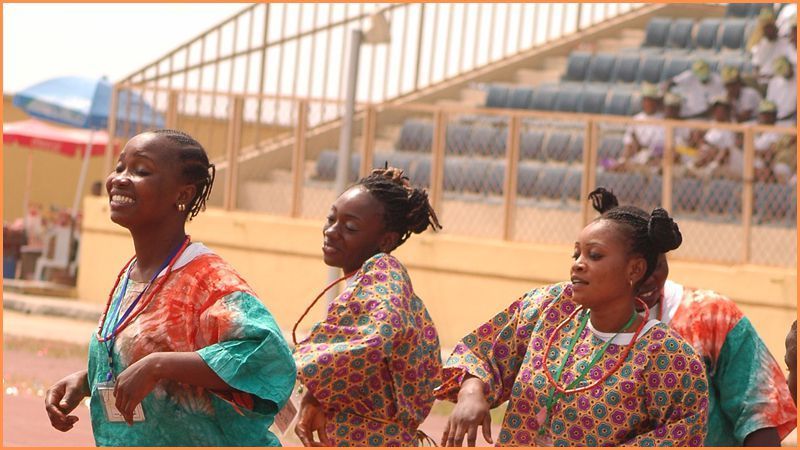 The Yoruba living almost exclusively in Nigeria’s South West number over 40 million so are comfortably the largest tribe in the whole of West Africa.  The huge conurbation of Lagos is primarily Yoruba with the people still recognizable as from a specific tribe simply on language. However, although other towns exist in the wider Yoruba region, many still live a tradition rural subsistence life. 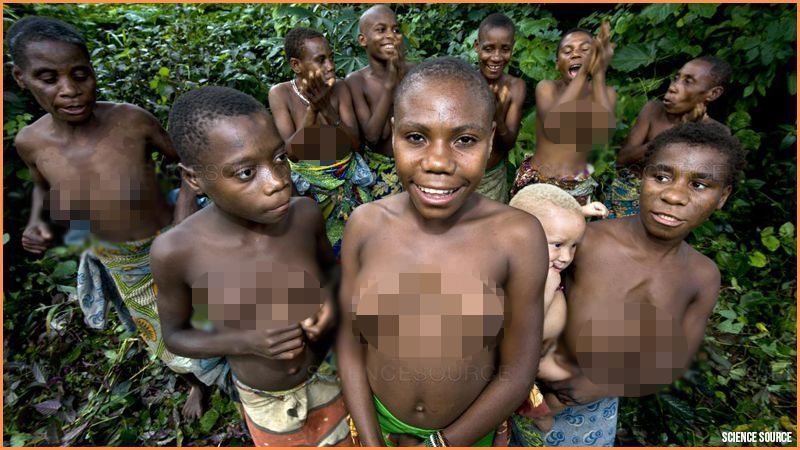 The best known of the Pygmy Ethnic Group are the Mbenga who are found in the West Congo Basin. There are a dozen different pygmy groups with the Mbenga one that speaks Bantu and Ubangian. They are hunter-gatherers largely dependent on what the forests can provide. They trade with neighbors for other things they need. Accurate numbers are difficult to ascertain but educated guesses suggest around half a million live in the Congo rainforest.

The beginnings of the Rift Valley start in Ethiopia heading south through Kenya and Tanzania. Uganda, Rwanda and Burundi are landlocked but very much part of the East. The East is rich in wildlife. The vast plains are home to huge herds and the predators who follow wherever they go. The tribes in the East are one that has been regularly seen on film living as their forefathers did though often now conservationists rather than seeking out prey. 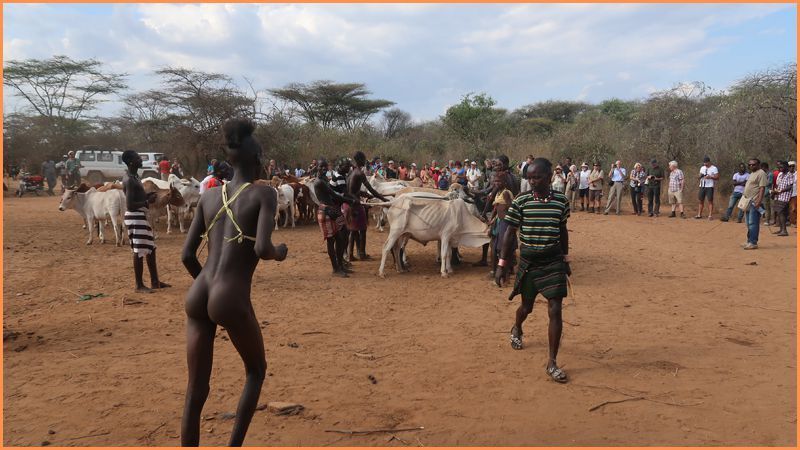 The Omo Valley of Ethiopia is a fascinating place. The Hamer is a tribe living in this fertile valley where their main activity is tending to their cattle and also known for the controversial bull-jumping ceremony. Ethiopia is attracting increasing traveler numbers and among its many attractions are the tribes in this southern valley. 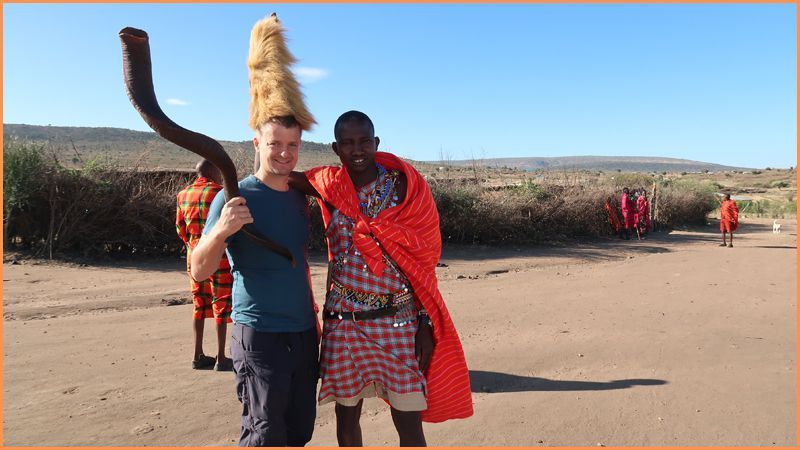 Perhaps the most famous in East Africa is the Maasai tribe. The tribe still tend to their cattle with a mix of milk and cows’ blood central to their diet. The majority live in Kenya and their homes close to many of the famous East African game parks have meant they have had significant contact with overseas tourists. Part of the Nilotic Ethnic Group, they speak Maa which is a language group known as the Nilo-Saharan and their numbers are increasing to approaching 900,000. 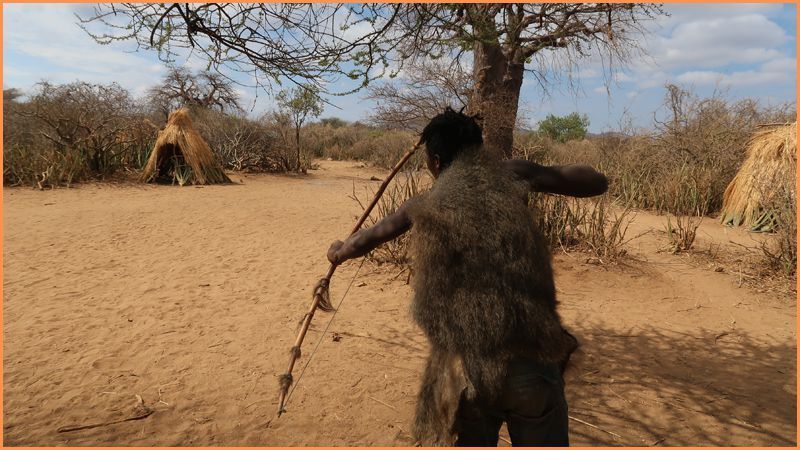 The Hadzabe of Tanzania are the last true nomads, hunter-gatherers of East Africa. They hunt with bow and arrow while the womenfolk search out edible berries and fruits. Tourists with a spirit of adventure can actually travel with them although there are not many ‘’creature comforts’’ for those who do. As a cultural experience, it has few equals in this part of Africa. There are fewer than 1,000 in the tribe who are related genetically to Pygmies rather than the Khoisan as was traditionally believed. Another tribe worth mentioning here is the Datoga Tribe, known for weapon-making skills that they actually supply the arrowheads used by Hadzabe for hunting.

Angola on the Atlantic Coast and Mozambique on the Indian Ocean were both Portuguese Colonies. The British were dominant in what are now Zambia, Malawi, and Zimbabwe while Namibia and South Africa have always been regarded as more developed than any of their neighbors. In many ways, Botswana is a jewel, with democracy established, wildlife and mineral resources. 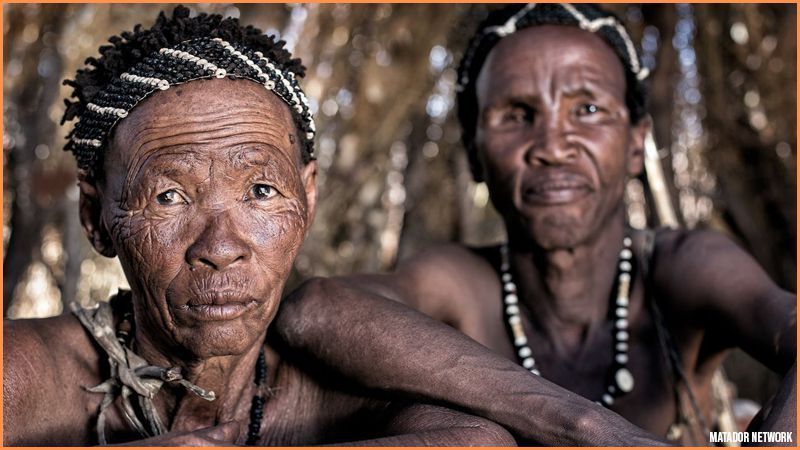 Commonly known as the Bushmen of the Kalahari, the San have developed skills to hunt and survive in a seemingly completely barren desert land. Their tracking skills are renowned and their success with bow and poisoned arrows is very impressive. They find water in undergrounds tubers and gather whatever fruit and berries are in season. They are found across Southern Africa in countries like Botswana, Angola, and Zimbabwe. There are significant linguistic differences across their wide territory, but survival skills are common to all. 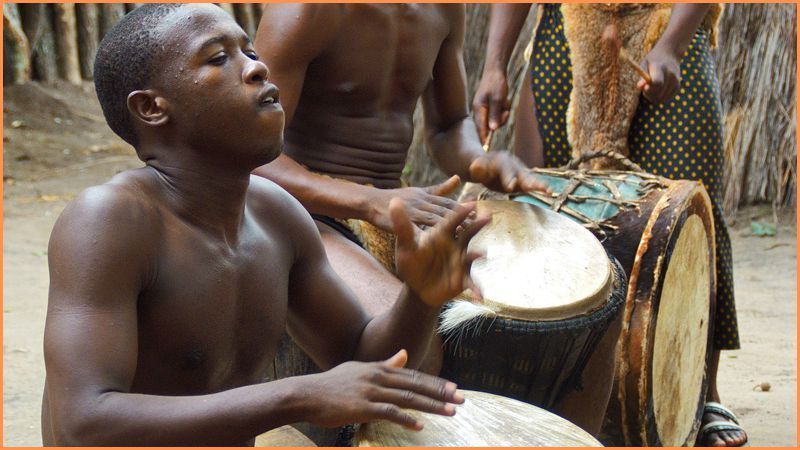 The Zulus number around 10 million today and they have been a powerful warrior tribe with Shaka’s Kingdom in the early 19th Century a mighty force. Their language is one of South Africa’s official languages and their home is KwaZulu-Natal on South Africa’s Indian Ocean Coast. 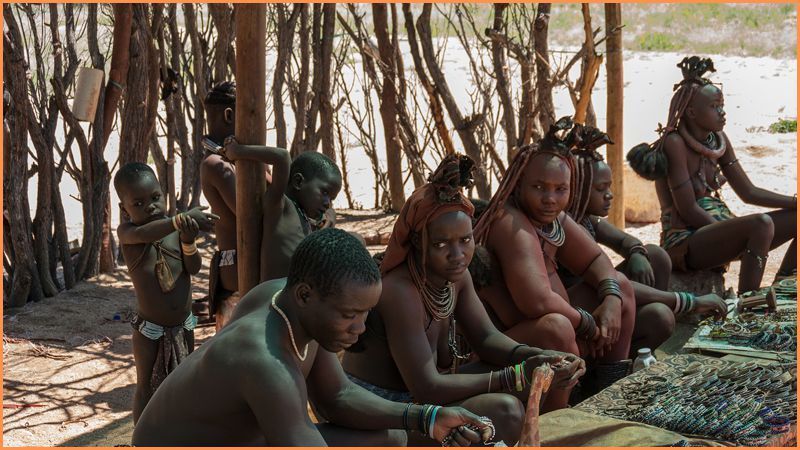 This small tribe living in Northern Namibia and up into Angola numbers around 50,000. Life is semi-nomadic, with people moving in search of grazing for their livestock. Their language is classified as part of the Bantu family within the Niger-Congo Group, more common further north.

Human life is thought to have begun in Africa; the Olduvai Gorge in the Eastern Serengeti in modern-day Tanzania. Human fossils were found there that are millions of years old. Over many centuries there has been a significant movement of people restricted only by natural barriers such as the dense equatorial forests. Deserts may not be an attractive proposition, but they have been able to sustain life.

In practical terms these days, climate and terrain dictate the lives of rural Africans. Travelers whose interests revolve around the fabulous wildlife on Africa’s plains will come into contact with tribes who were once hunters but no more. The people of the north all face similar issues of surviving in a harsh, often extremely dry, environment.

The equatorial forests on the Congo still hold secrets simply because they are largely impenetrable. Life has never really changed in centuries but as a location for overseas visitors, only researchers and documentary filmmakers are likely to go there.

Africa is a continent of infinite variety yet in some ways it, and its tribes, have a common theme; adventure and something new around every corner. It will remain a largely rural continent, and hence the tribal element is unlikely to change to any great extent.