The first warm, sunny days of spring in the southern Mykolaiv region are ushering in a grim new reality: the smell of the dead.

As the frost melts and ground thaws, the bodies of Russian soldiers strewn across the landscape are becoming a problem.
In his nightly video address on Saturday, Vitaly Kim, the region’s governor, called on local residents to help collect the corpses and put them in bags, as temperatures rise to above freezing. “We’re not beasts, are we?” he implored residents, who have already lost so many of their own in this war.
Mykolaiv was among the first regional capitals to be attacked after Russian President Vladimir Putin launched the invasion of Ukraine on February 24. After pushing into the urban center, Russian troops have been forced out by Ukraine’s military, leaving a trail of blackened combat vehicles and tanks in their wake. But the battle for the city, a cornerstone in Russia’s westward quest along the Black Sea coast to Odesa, is still raging and it’s unclear how long Ukrainian forces will be able to fend off the assault.
Referring to them as “orcs”— the evil, monstrous army in J. R. R. Tolkien’s “The Lord of the Rings” — Kim said that the Russians had retreated and left their colleagues’ charred bodies behind on the battlefield. He sent CNN pictures of the abandoned corpses, adding: “There are hundreds of them, all over the region.”
The governor has called for the bodies to be placed into refrigerators and sent back to Russia for identification through DNA testing. But, a month into the war, it is still unclear how or if the remains of soldiers are being repatriated to Russia, where reports about the death toll have largely been silenced. The country has cracked down on any information about the realities of the bloody war, restricting access to Western media reports, as well as the social networks Twitter and Facebook, in Russian territory. 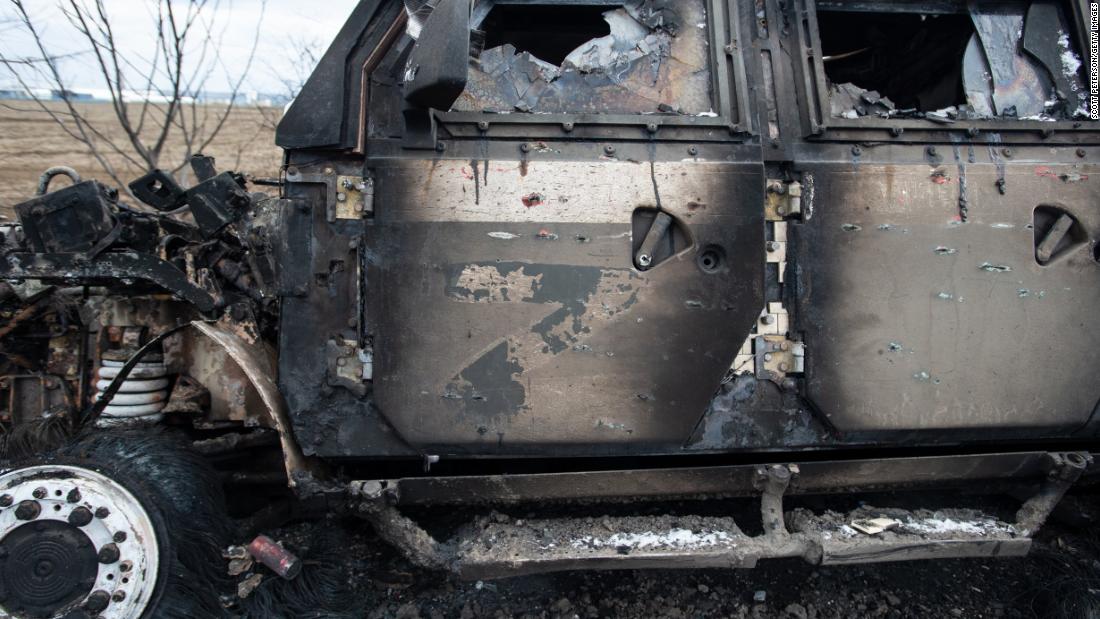 Exactly how many Russian troops have been killed in Ukraine remains a mystery. The official line from Russia’s defense ministry was 498 military personnel until Monday, when pro-Putin Russian tabloid Komsomolskaya Pravda published a report updating the toll to 9,861. The figure, which was attributed to the ministry and later retracted by the paper — which claimed it was hacked — has not been confirmed by the Kremlin, whose spokesman Dmitry Peskov on Tuesday told CNN: “As far as the numbers are concerned, we agreed from the very beginning that we do not divulge the information.”
That number tallies with information shared with CNN by US and NATO officials, who gave a recent estimate that Russian casualties range from between 3,000 and 10,000. Ukrainian officials have claimed the toll is even higher, at more than 15,000. CNN has been unable to verify the overall number of Russian deaths.
One of the most searing, early images of the war in Ukraine was of a dead Russian soldier, his face and body obscured by a dusting of newly fallen snow. The picture, shot by New York Times photojournalist Tyler Hicks, captured the anonymity of the more than 150,000 Russians sent to fight their neighbors — and the anxiety of Russian families desperate to find out any information about their fate. 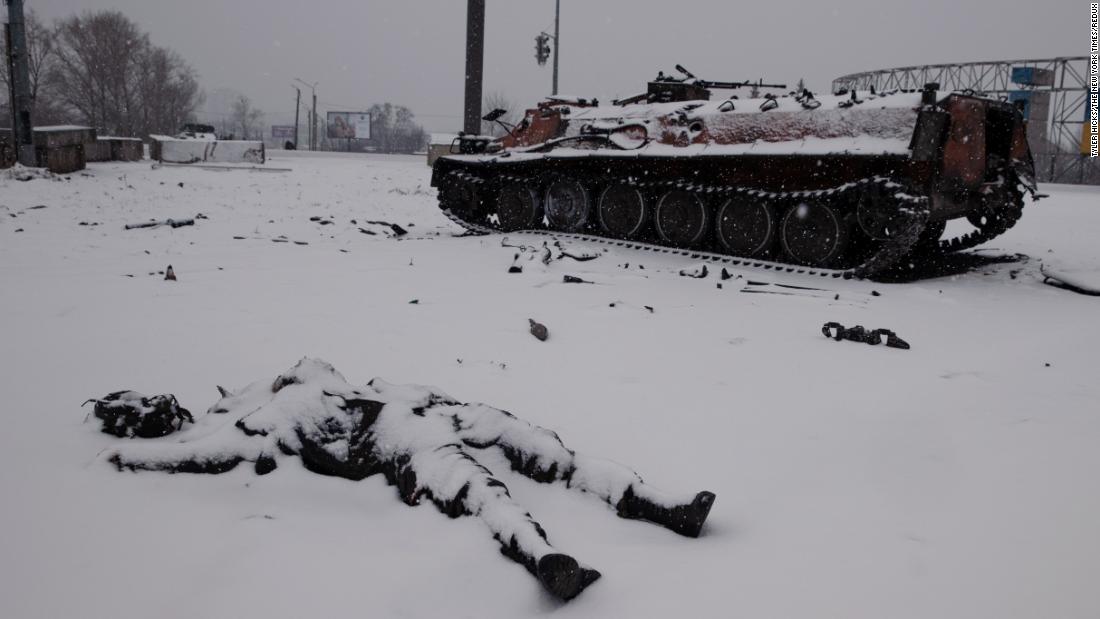 Snow covers the body of a dead Russian soldier near a highway outside Kharkiv, Ukraine, a day after the invasion began.
The Ukrainian government has claimed that the Russian army sent mobile crematoriums to burn their own dead. “The Russian people dying here, nobody is counting them, people dying in this war. Do you know they have brought a cremation chamber with them? They’re not going to show the bodies to their families. They’re not going to tell the mothers that their children died here,” Ukrainian President Volodymyr Zelensky told reporters in a briefing on March 3.
On the same day, Ukrzaliznytsia, the state-owned Ukrainian Railways, said in a statement on its website that it had provided Ukraine’s armed forces with 20 refrigerated cars for the removal of dead Russian soldiers from several areas, including Odesa. Just 72 hours later, Ukrzaliznytsia’s chairman posted a message on his personal Telegram channel saying that Russia never came to load them. “For the sake of ‘victorious’ propaganda, they are ready to deprive mothers of even the opportunity to bury the bodies,” Oleksandr Kamyshin wrote.
Ukraine’s government said it is still waiting to receive a request from Russian authorities for the repatriation of the bodies of those killed. The Ukrainian deputy prime minister said the issue of collecting and identifying the bodies had been discussed in a meeting between Prime Minister Denys Shmyhal and the president of the International Committee of the Red Cross, Peter Maurer, on Thursday. But the ICRC has not confirmed whether it is assisting Ukraine in the return of Russian remains to their home country, which is provided for under international law.
Hints at the scale of Russia’s troop losses have begun to emerge in videos and reports. On March 18, the Belarus service of Radio Free Europe/Radio Liberty, a US-funded media organization, published images of Russian ambulance convoys appearing to arrive at field hospitals in southern Belarus, near Ukraine’s border, and reported that morgues in the area were overflowing. A March 21 report by English-language Ukrainian media outlet The Kyiv Independent followed a Ukrainian emergency response unit digging up Russian soldiers buried in unmarked communal graves in Rusaniv, a village east of the capital — left in a heap without identification documents or IDs. 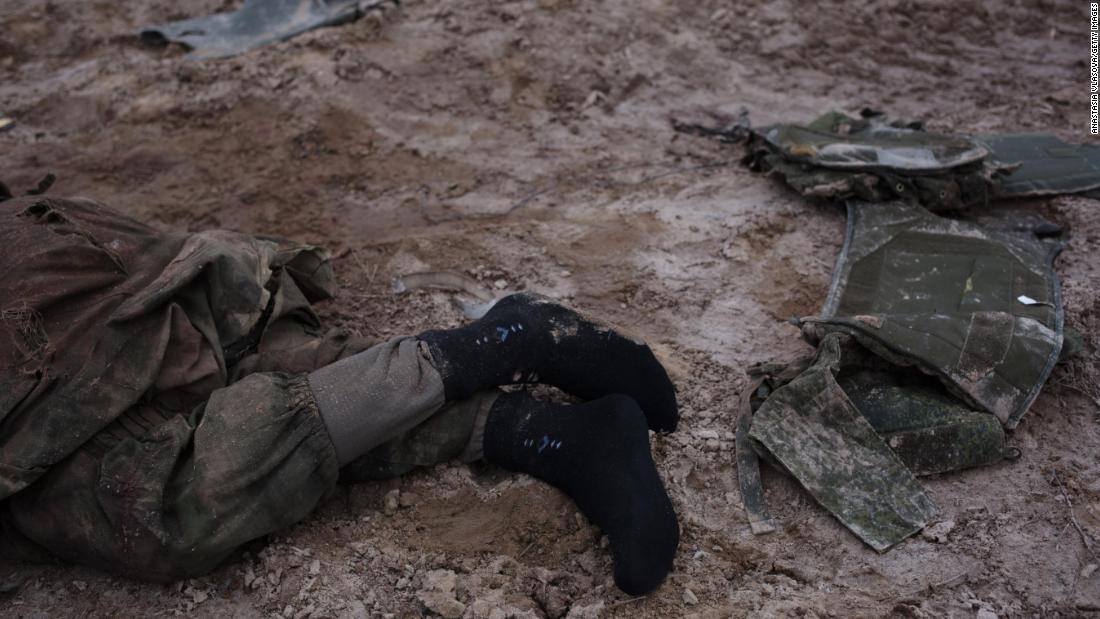 The deserted corpse of a Russian soldier lying on a road in Sytniaky, Ukraine, on March 5.
Russian state media reports have stuck to the 498 figure and few funerals have been documented in the country, where censorship of the war has been taken to an extreme with a new law criminalizing reporting contradicting the Kremlin. In the absence of information about Russia’s dead, Ukrainians have been trying to fill in the gaps.
A website and Telegram channel established by the Ukrainian Ministry of Internal Affairs, aimed at Russian families, publishes a steady stream of photos of dead soldiers and captured young men, sometimes alongside their identity cards. The name of the site, 200rf.com, is a grim nod to Gruz-200, or Cargo-200, a military code word that came into use in the 1980s during the war in Afghanistan, used by the Soviets for the bodies of soldiers placed in zinc-lined coffins for transport.
Viktor Andrusiv, an adviser to Ukraine’s internal affairs minister and the creator and coordinator of the channel, also known as “Look for Your Own,” said he launched the initiative to help Russian families track down information about their soldiers. “We are not making war against the Russian people. And I don’t think they should suffer because of their regime, which lies to them and says everything is good, no one is dying,” he told CNN. “It’s a way for us to bring them some truth.”

“The problem with Russian bodies is really huge. It’s thousands of them. Before the war, the weather was cold, it was okay but now we have problems … I actually don’t know what we will do in the next weeks.”

But identifying dead Russian soldiers has been a difficult task. Andrusiv said only 30 have been found on the Telegram channel by their relatives, who scan through gruesome images of those killed in action for clues about whether their loved ones are alive or dead. Ukrainian forces send Andrusov images of deserted bodies, but they’re often unrecognizable and have no documents on them.
“It’s very difficult to identify the dead because normally they don’t have documents with them, normally the commanders take their documents and put them in some boxes. Normally they die in this fire, in shelling. And you cannot identify the metal ‘dog tags,’ where their number is written, it gives us no information about the person,” Andrusiv said.
And as March turns to April, and temperatures climb to around 60 degrees Fahrenheit, the problem is getting worse.
“The problem with Russian bodies is really huge. It’s thousands of them. Before the war, the weather was cold, it was okay but now we have problems because Russians don’t want to take the bodies,” Andrusiv said. “I actually don’t know what we will do in the next weeks with their bodies.”
CNN
Facebook
Twitter

Surprise
0 0 %
Tags: bodies of Russian soldiers are piling up in Ukraine

Philippines refuses to cooperate with ICC ‘war on drugs’ probe